“The University of Pennsylvania and Princeton University are facing serious questions about how researchers handled human remains from the 1985 police bombing of a Black separatist group in West Philadelphia. This scrutiny follows revelations that the universities housed unidentified children’s remains from the bombing for years, and that the remains were used for teaching at Penn. The anthropologist at the center of the case says he’s troubled by allegations that he acted unethically, and some in the field have spoken up to defend him. But critics see the case as an undeniable example of academic racism, made even more bitter by the police actions that underlie it.” (Source: InsideHigherEducation)

The perception has been that academic institutions, as places of higher learning, are places free of bigotry and bias. But ask any person of colour entering any white institution, and they will tell you that while they may feel confident of their place to be there, the environment is the total opposite. Why is this the case?

The University of Pennsylvania established: 1740 (chartered in 1755), was founded by Benjamin Franklin and was the first US university to offer undergraduate and postgraduate studies.

The law for gradual emancipation in Pennsylvania passed on February 1780. The 6,000 or so Pennsylvania slaves in 1780 stayed slaves. Even those born a few days before the passage of the act had to wait 28 years before the law set them free to allow their masters to recoup the cost of raising them

Princeton University, established: 1746, was initially founded as the College of New Jersey by New Light Presbyterians to train ministers. New Jersey was a slave state until 1789.

The South’s creation of police forces was centered on preserving the slavery system to protect its economy. Some of the primary policing institution’s slave patrols were tasked with chasing down runaways and preventing slave revolts. The first formal slave patrol was created in the Carolina colonies in 1704.

Situated in a slave state, Princeton University and the University of Pennsylvania would have aligned themselves with the law of the land and its law enforcement principles.

It is also important to note that the military became the primary form of law enforcement in the South during the Civil War. Still, during Reconstruction, many local sheriffs functioned analogous to the earlier slave patrols, enforcing segregation and the disenfranchisement of freed slaves.

So, it is understandable that the norms in which these institutions were founded are still very much the norms they function in today.

In over 280 years, the demographics at white institutions illustrate the slow pace of transformation and why the professors at these institutions were unconscious of their biases as they were operating within the institutions’ norms. But while their bias can be explained, it does not mean that they are exempt from their actions. Like we question police behaviour, we need to examine the professor’s behaviour, why did they not concern themselves about the victim, the victim’s family and their humanity. Their actions speak volumes about the privilege and the institutional environment that frames their action. 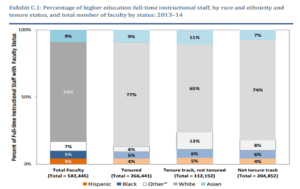 Fazela HANIFF is an HR, OD and HE internationalization specialist and serves on ACEI’s Global Consulting Group.  Ms Haniff completed her Human Resources Management studies at Ryerson University, Higher Education Management from the University of the Witwatersrand and Bachelor of Business Administration from Yorkville University. She is the Past President of the International Education Association of South Africa and first woman president. In 2010 she received an award in recognition of “Exemplary Leadership as IEASA President”. She has contributed widely to the internationalization dialogue via presentations and workshops to IIE, NIEA, NAFSA, EAIE, EAIE, IEASA, APAIE, and contributed to numerous publications related to international higher education. Fazela currently lives in Toronto Canada.

We use cookies on our website to give you the most relevant experience by remembering your preferences and repeat visits. By clicking “Accept All”, you consent to the use of ALL the cookies. However, you may visit "Cookie Settings" to provide a controlled consent.
Cookie SettingsAccept All
Manage consent

This website uses cookies to improve your experience while you navigate through the website. Out of these, the cookies that are categorized as necessary are stored on your browser as they are essential for the working of basic functionalities of the website. We also use third-party cookies that help us analyze and understand how you use this website. These cookies will be stored in your browser only with your consent. You also have the option to opt-out of these cookies. But opting out of some of these cookies may affect your browsing experience.
Necessary Always Enabled
Necessary cookies are absolutely essential for the website to function properly. These cookies ensure basic functionalities and security features of the website, anonymously.
Functional
Functional cookies help to perform certain functionalities like sharing the content of the website on social media platforms, collect feedbacks, and other third-party features.
Performance
Performance cookies are used to understand and analyze the key performance indexes of the website which helps in delivering a better user experience for the visitors.
Analytics
Analytical cookies are used to understand how visitors interact with the website. These cookies help provide information on metrics the number of visitors, bounce rate, traffic source, etc.
Advertisement
Advertisement cookies are used to provide visitors with relevant ads and marketing campaigns. These cookies track visitors across websites and collect information to provide customized ads.
Others
Other uncategorized cookies are those that are being analyzed and have not been classified into a category as yet.
SAVE & ACCEPT